0
was successfully added to your cart.

For poultry producers, windrowing, or piling of litter into long rows for the purpose of composting, has long been touted as a solution for bacteria control and the extension of litter re-use. However, research shows that there may be a more effective and easier solution.

Litter composting is a biological pasteurization process dependent on the activity of microorganisms, and requires precise conditions to be effective, including:

If these precise variables are not met, the necessary temperature will not be reached, and bacterial control will not be effective. Keep in mind that the uninsulated earth foundation of a broiler house conducts heat away from the windrow piles, producing a sharp 50oF temperature gradient within the bottom five inches of the pile. The same will happen throughout the piles surface due to ambient air temperatures.

Poultry litter is not an inanimate object; It contains a complete ecosystem with physical and biological characteristics that are dependent on bird size, diet and litter handling during down time. Most used poultry litter has a low carbon nitrogen ratio of 10-15 making it difficult to reach the necessary temperature of 130-135°F within 48 hours unless the C:N ratio is raised to at least 15:1—which often requires the addition of upwards of 22 tons of fresh litter to each windrowing cycle.

If windrow composting is attempted without raising the C:N ratio, several undesirable events will occur:

Researchers agree that if temperatures do not peak above 135oF, litter should be spread out and prepared for the next flock.

Proponents of windrow composting often call on specific research to support their management decision. However, results from much of that data has been overstated, including the ideas that in-house composting: “eliminates E. coli, staph, aspergilla, Salmonella and respiratory virus; reduces aerobic and anaerobic bacterial populations, and eliminates/reduces cocci.” A study by D. Bautista showed that, “cocci oocyts were inactivated by the composting treatment inside the compost pile (1-foot depth) but not on the surface of the windrowed pile or at room temperature in the house.”

Also, research has brought to light concerns that, due to the nature of the spore, Clostridial spores may not be impacted by 130-135oF temperatures even though Clostridia in its vegetative state is sensitive.

So how should windrow composting success be defined? Bacterial reduction is assessed by looking at log 10 differences. A minimum of 3 log reduction is needed for bacteria to truly have been controlled.

In one study (Table 1), windrowing only produced a 0.5-1 log reduction so it was ineffective in reducing bacteria (Lavergne et al, LSU). 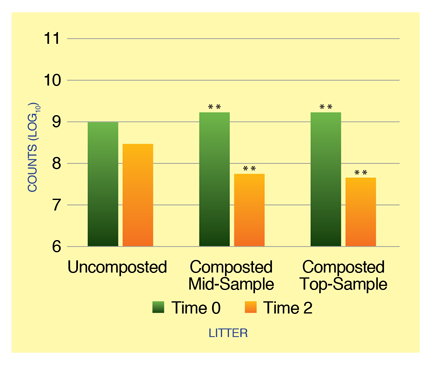 In situations such as this, the failure to meet minimum bacterial reductions will require additional steps by the producer or the flock will face increased challenges.

If your litter is 8-9 inches deep, scalp the sides of the house and pull litter in center to sidewalls.

Increase the amount of litter amendment applied to meet the increased ammonia challenge.

An Alternative to Windrowing

When all the variables are satisfied precisely, windrow composting can be an effective management tool. However, with its challenges research have investigated, and found, an equally effective and easier alternative. Multiple studies have shown there is absolutely no difference in bacterial counts between windrowed and un-windrowed litter with sufficient downtime (Tables 2 and 3). 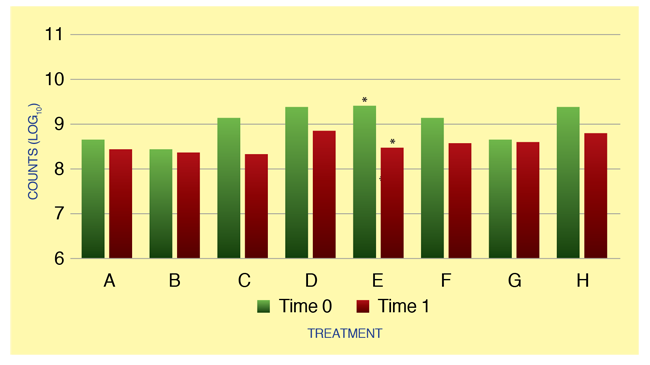 Table 2. Pre-treatment and 7 days later: A-D had no windrowing, E-H windrowed: No Difference in Aerobic counts

If windrow composting will be a part of your litter management practices, be sure all the necessary ingredients are equally proportioned for a successful heating process:

Multiple turns and sufficient down time
Increased litter amendment application rates to meet ammonia challenge of next flock
Increased ventilation during down time and brooding
Make sure moisture content is sufficient in litter base to meet requirements to achieve desired temperature and enough time to pasteurize the litter.
Always test your temperatures

Share your story of how litter management has changed and win up to $500 in our Litter Stories Sweepstakes!